May 2020 has turned out to be a bit different than expected for Air Force Sergeant Daphne "Daff" Pringle. She was set to compete at the Invictus Games in the Netherlands, as part of a 22-strong New Zealand Defence Force team.

Instead, she and her comrades watched on as Covid-19 gradually shut down the world and forced the postponement of the Games.

"It was a huge relief when the Invictus Games Foundation announced it was postponing the Games until next year as it was quite stressful watching Covid-19 ravage the world. Many of us in the team wouldn't have been able to go with our current health status anyway, so it was good to have that decision finally made for us," she says.

The games are a chance for wounded, injured or ill current or former service men and women to compete on the world stage. Instead, Daff is in her bubble with husband Grant, an Air Force Warrant Officer, daughters Lucy, 18, and Charli, 15, and son Jack, 12.

Daff is eligible to compete in the Games after being hit by the autoimmune disease, sarcoidosis, three years ago. The condition damaged her heart and an implantable cardioverter defibrillator (ICD) device was fitted to restart her heart if needed. And the device did just that, restarting her heart in the middle of the night, within just one year of being implanted.

Daff says it's important people listen to their body and seek help early if something changes from 'your normal'. 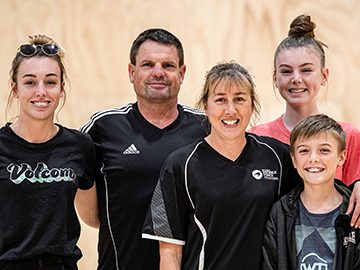 She says she waited far too long to seek help, being told she was just unfit and that was why she couldn't breathe properly, walk upstairs without puffing, and felt dizzy and fatigued. But when she did get help, a painless 30 second ECG told the doctors something was seriously wrong.

"Even when I was told it was my heart, I continued to work and soldiered on. In hindsight it was silly, really, knowing now that my heart could have stopped at any time. I guess being in the cardiac ward on my forty-fifth birthday put things in perspective!

"Women, and especially mums, just soldier on and often put their needs aside but so many things can be fixed through education and early intervention. So, if it doesn't feel right, get it checked out."

The Invictus Games were founded by Prince Harry, the Duke of Sussex, and are based on rehabilitation through sport. This year they would have involved 500 competitors from 20 allied nations competing in a range of adaptive sports. Daff was planning to compete in archery, athletics and wheelchair basketball, so she’s had to rethink her training programme and do what she can in lockdown.

"My training has changed somewhat due to having no access to a gym or wheelchair for basketball. I'm lucky to have a backyard archery range so I can continue to shoot, and I've been working on getting my cardio fitness up, which is excellent for my heart health.

"Staying motivated has been a bit hard as I'm missing the team contact and we’re not sure what the next year holds, but we’re using social media to challenge and motivate each other, and a few of us have diversified and even have a baking competition going!"

Daff says after her diagnosis she was initially told a lot of things she couldn’t or shouldn’t do, which led to a loss of confidence.

"Now I've come to terms with my heart condition and the Games postponement and I'll do what I can to the best of my ability, whatever that looks like. It's my new normal."

The NZDF team is supported by Fulton Hogan and Dynasty Sport.

Talking to your GP about your heart
Print this page