After a four week trial, is paleo the way to go?

For the past month, seven dietitians and nutritionists in the Heart Foundation have switched to a paleo way of eating, to gain personal knowledge of the approach. So, how did the experts fare and did the wheels fall off? 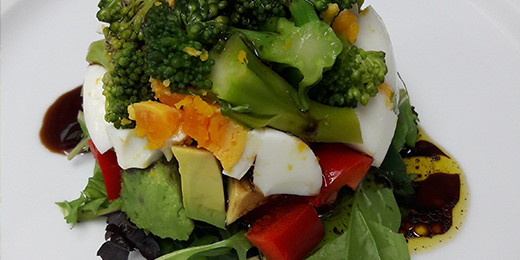 In its strictest form, paleo limits dairy and grains, potato, legumes and processed foods. It is important to note, however, that there are varying degrees of paleo that people may follow. Some variations can be better described as a whole food approach to eating, where small amounts of dairy and legumes are included.

There were some slight variations between the individual approaches we took, but all focused on whole and less processed foods and the exclusion of dairy, grains and legumes (including peanuts). For the most part, participants chose to follow a lower saturated fat version of paleo. This meant we didn’t increase our intake of coconut oil or fatty meats.  Some dropped coffee (eeek!) while others refused to take out the odd glass of red wine. There were some differing ideas about what quantities of processed foods were acceptable. A small amount of less-processed foods were included by some such as almond milk, canned fish and curry pastes for variety and practicality. One even left in his favourite chipotle sauce to add some extra spice into lettuce-based wraps …cheat!

There were some hiccups in the first week which were rectified. This is to be expected when modifying any eating pattern. The initial challenge was juggling the right quantity of food and balance of food groups (particularly protein and carbohydrates) for satiety and relative to activity levels. All of the participants found that meals/snacks had to be planned to ensure balance and variety, without the convenience of grain-based foods.

Some individuals experienced headaches and tiredness over the first few days. This was due to a sudden change in eating patterns. For some who went ‘cold turkey’ without coffee, this could have been a contributing factor.

Some found the paleo approach to be a similar cost as their normal eating pattern while others found it more expensive. Many steered away from expensive paleo branded products and opted for more natural, raw and whole foods. Several people made cracker, bread or cereal equivalents using some simple recipes (there are plenty around).

Some simple substitutions helped such as: cauliflower rice (surprisingly good) for normal rice; lettuce leaves for bread; eggplant, mushrooms and spinach as bases for meals instead of pasta; and replacing potato with other root vegetables such as carrots, kumara and beetroot.

Personal experiences in a nutshell

Good cooking skills and food knowledge helped with planning meals and including plenty of variety. I could follow over a longer-term with the inclusion of small amounts of dairy, quality wholegrains, some craft beer and my favourite chorizo. I don’t care what any caveperson tells me, bacon and other processed meats are not staples of a whole food or paleo approach. Some quick unplanned meals were a challenge. Having leftover roast vegetables and accessible protein options such as hard boiled eggs or canned fish became useful in these situations.

I was a bit of a ‘late-adopter’ in coming on board for the paleo challenge. Being sick the first week and having sick children the next, convenience, grains and routine were my friend. I finally came on board in week three. However, due to juggling a young family with a busy lifestyle, I chose to go paleo-ish, rather than fully adopting the full paleo approach.

While I’ve been following paleo about 80% of the time, some trim milk has slipped back into my morning coffee - ‘curdled’ almond milk lost its appeal. I have also had the odd bowl of porridge, as I battle getting two pre-schoolers ready for the day ahead. I also had some cake at my niece’s birthday – yes, cake! I’m a firm believer that having a positive relationship with food, where treat foods can be included occasionally without guilt, is just as important as healthy eating.

Overall, I have found the paleo-ish approach has worked well for me, especially as it wasn’t too restrictive. I’ve enjoyed trialling new foods and recipes and have increased my intake of whole foods along the way. However, I am looking forward to incorporating legumes and more dairy back into my diet, as well as a little bit of processed food, when convenience calls. When that happens I’ll continue to read food labels to know exactly what is in my food, with whole and less-processed foods continuing to make up the bulk of my diet. As for grains, while they will also be back ‘in’, the last couple of weeks has made me think more about the quality and quantity of grain foods I include in my diet and that of my family’s.

After the shock of the first grocery bill that was way over my normal spend, I settled into making sure I had enough to eat and didn't end up feeling hungry. That required a lot more pre-planning and preparation. I really liked the fact that I was eating a greater variety of food and a lot more vegetables. The challenges were all about different situations and it has made me realise how many foods eaten away from the home are carbohydrate and sugar-based. I feel that this way of eating would be very challenging for people on a low income and extremely difficult, if you didn't have good cooking skills.

A bowl of oats is an important part of my morning ritual, especially before a running event. My training for the Auckland Marathon is also in full-swing. I was curious to see how changing my eating pattern, especially cutting-out grains, would affect energy levels and performance. The paleo challenge was a good excuse to spend more time in the kitchen, be creative with recipes and get organised with weekly meals. It reminded me to be open to new ideas and different ways of eating. I cook vegetarian meals often using legumes, tofu and cheese. Increasing my meat consumption for protein meant adjusting the way I think, budget, shop and cook. So how did my training run go? Unlike previous events, I felt light-headed and low in energy. Change in diet could be one of many reasons for this. My key piece of advice is to seek guidance first. A registered health professional or expert in sports nutrition will help you develop a plan that suits your needs, no matter what dietary approach you follow.

I enjoyed the fact that it made me look for new recipes and alternatives to try – it’s too easy to get stuck in a rut cooking the same handful of recipes every week. I found dining out with friends to be the biggest challenge. They all understood why I was doing the paleo challenge and thought it was a great idea. However, not all restaurants and cafes offered choices that suited so I was paleo-ish on those occasions. Overall, I liked trying new recipes and they’ll stay in my repertoire of meals to cook. For the long-term, I don’t think it is sustainable for me to totally remove foods such as rice and soy from my diet, as dinners with my parents and extended family tend to be Chinese cuisine.

Following the paleo plan forced me to be a lot more planned with my food intake. The slow cooker became my new best friend and my vegetable intake increased dramatically. It also helped me realise how much incidental eating I partake in during a typical day; finishing off kids meals, a sneaky slice of cheese while cooking; or a muffin/scone at a catered morning tea. I will definitely be bringing wholegrains, legumes and dairy back, but will hopefully maintain the high vegetable intake and be more aware of what I eat, particularly in-between meals.

Things I loved about paleo? Definitely the focus on eating nutrient dense foods. I loved the way more vegetables were included in each meal – it felt like I was nourishing my body from the inside out. It’s also reminded me of how nutrient-poor many common convenience foods are. There were definitely challenges going paleo too such as: going without my twice weekly latte; eating out; staying with friends/family who aren’t paleo; saying ‘no’ to un-paleo foods at celebrations; and eating a lot of eggs.  I did try out some paleo recipes with the family at home. The kids aged six and nine weren’t keen on some of the paleo alternatives to bread and rice but at least they tried them. I will continue to make vegetables the base for meals, with good quality protein and fats included. However, dairy is definitely coming back in, along with legumes and some of the higher quality grains foods.

Paleo has got a bad wrap, excuse the pun, by many.  However, stripped back to its bones, it is largely a whole food approach that is built on quality foods with plenty of vegetables and less processed foods. This is something that is also at the very heart of our nutrition advice. It, therefore, may come as a surprise to many that paleo has more in common with the Heart Foundation’s advice than different.

We’re not suggesting to go paleo, but there are aspects that we can take from the paleo way of eating and apply to our eating pattern to make it healthier. Increasing consumption of whole foods, especially vegetables and fruit, and reducing processed products is a great place to start. However, as for the removal of food groups like dairy, grains and legumes, unless there is a medically diagnosed reason to do so, then these foods can be incorporated into a heart-healthy diet.

We suggest to anyone that when changing eating patterns that they do so in a way that is sustainable and that works for them and their lifestyle. We would suggest if anyone is embarking on major dietary changes that they seek out the help of a dietitian or nutritionist who has the right experience to support that change.

There’s no ‘one size fits all’ approach, when it comes to healthy eating. We each have individual nutritional needs, budgets, cooking skills, taste preferences and lifestyles. It’s all about finding a style that suits you best.

We had a team that together took up the paleo challenge and who were able to motivate each other and share recipes. Supportive environments make it easier to make healthy eating and lifestyle choices for the long-term.

How do I eat for a healthy heart?

I completed chef training while studying nutrition/ dietetics and enjoy combining both of these elements to develop practical solutions for families to eat healthier.

I am passionate about improving the health of all Kiwis from young through to old. I have enjoyed working in nutrition in the UK, Australia and New Zealand.

You can save lives by funding research